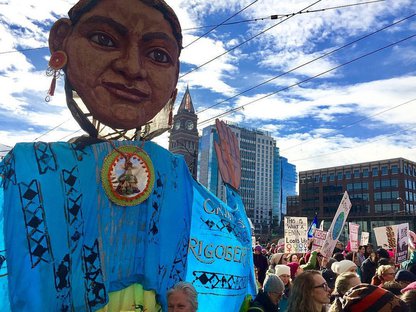 On the day after the American people voted last year I avoided the news and Facebook. Last Friday, people on my Facebook timeline were  quoting the inauguration speech of the 45th President of the US and I decided neither to watch it, nor to read it.

As a Westerner I was raised in a world that aspired for women to be equals and those achievements are now being challenged in a way that I would never have thought was possible, including by someone occupying the role often designated as “leader of the free world.”

We are still seeing and experiencing grave differences between men and women all over the world. Different religions. Different nationalities. Different cultures. Discrimination of anything people might perceive as ‘the other’. Overall a lack of humanity, of empathy and compassion for one another.

On Saturday I opened Facebook here in the remoteness of Lebanon’s North and there was hope all over it. With great amazement and happiness I followed as my friends across the world posted their pictures and impressions from the marches they had joined. Although I could not be with them at least I was able to witness the strength, the wit and—despite everything—the humour that people displayed all over the world to counter the scary threats that we are experiencing. Women and men standing up and saying ‘No!’. I continue to be amazed by the sheer masses of people that went outside and took a stand.

On Saturday I saw humanity, empathy, compassion—and—most importantly—the will to fight for these values that I had feared were disappearing. We have perhaps not made the progress I thought we had when I was a youngster, but now at least I can be certain that these are values shared by millions all over the world.