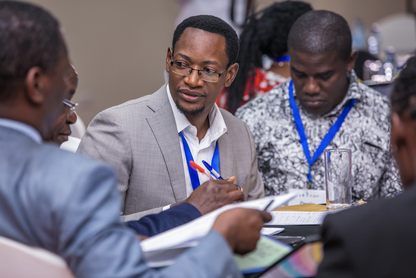 PASGR was founded in 2011 as a response to the declining academic standards, especially in quantitative research methods, in African social science institutions. It was initially funded by DFID with five-years to become self-sustaining. But it managed to do so in only two years, adding supporters like the Carnegie, Hewlett and Mastercard Foundations. To date, it has partnerships with 14 universities across more than ten African countries, with the goal of expanding in western and northern Africa.

PASGR’s focus on public policy research is based on the understanding that public policy cuts across all sectors such as health, education, economics, arts and culture. As such, it hopes to positively influence public policy decision-making in Africa through its collaborative programmes to bring about social change. Its three core programmes are Research, Higher Education, and Professional Development and Training.

PASGR’s Research Programme focuses on governance, with the core themes of urban governance, inclusive development, and social protection. The organisation has its sights set on providing increased opportunities for governance research, capacity building, and direct engagement between emerging scholars and established senior researchers.

PASGR’s Higher Education Programme includes the Pedagogical Leadership in Africa (PeDaL) programme that brings together eight partners under the vision of transforming teaching and learning practices to enhance the quality of graduate programmes in Africa. It is the only African-led programme of its sort – and currently being implemented in Kenya, Uganda, Tanzania, and Botswana.

Throughout the years, PASGR also has enrolled more than 700 students in its Master’s Programme in Research and Public Policy, in its partner universities. PASGR continues to set its sights even higher.  A doctoral program in public policy is in the design phase and is envisioned to be established in different continental universities, fostering collaboration and an evidence-based approach to public policy on the continent.

Through its Professional Development and Training, also known as the PASGR Institutes, the organisation has trained over 1600 researchers. Key features of the training programmes include the integration of gender and academic leadership development for university leaders.

It is this strive for excellence that led to PASGR being awarded an A+ in its ten-year DFID annual review. For its next phase, PASGR seeks to expand its reach to become a truly pan-African organisation, reflective of the full diversity of the continent. It will measure its success not by numbers of those enrolled in its programmes, but by how research is translated into “social and public policy that addresses the current and future key development needs of Africa”.