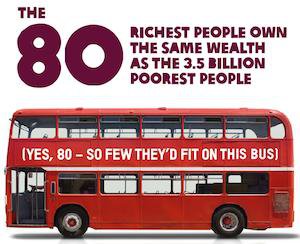 I recently attended a conference on global transformation. The conference organizers (GIZ) announced that the gathering would become a biennial platform to review the Sustainable Development Goals. Admittedly this did not fill me with excitement. After 15 years, we have just arrived at the supposed completion of the eight MDGs, and now we are rushing forward with 17 new goals? The goals were agreed upon via one of the most consultative processes ever, but in the massive group think they have become so dull that I would only advise reading them now if you are thinking of heading to bed.

The idea behind creating a broader set of goals was to set targets for developed countries too. A nice sentiment, but in the process the goals have become owned by no one, yet for everyone. There is a saying in Brasil: A dog that has two owners starves. Without firm champions, the SDGs will never get off the ground.

We can’t just propose another round of goals and hope for the best. We need to break the mould and propose something that will excite people. From a mobilisation point of view, it’s amazing that the MDGs worked as well as they did from 2000-2015. Many smart campaigners poured their heart and souls into spreading awareness about something incredibly hard to communicate. In 2000, the concept of development goals was new, and if you read the fine print, they were even achievable.

I was part of an advocacy team in 2006 that printed 20,000 wallet-sized cards listing the MDGs to pass out at conferences. We gave out every one and, like many other people, if you gave me a pop quiz I could still tell you the eight goals. But you will have to find an entirely new generation of campaigners to sell the SDGs, because I do not know anyone who is on board today. Campaigning is about momentum and inspiration; neither of which are part of the SDG package of 169 targets.

But in the noon plenary, I still found hope for transformation. Front and center stage was Oxfam, completely reframing the conversation. Launched last year to coincide with the World Economic Forum, the Even it Up Campaign made a splash with this:

Equality. It’s an old idea, but a new way of framing the conversation. Countries have reduced poverty in recent years, but opportunities for further reduction are wasted if economic growth benefits only a few. Indeed, a country could be growing economically, but all the wealth could be going to a few while the majority becomes worse off. If taxes were more equitably paid on this wealth, we could provide access to education and health to more people.

According to Oxfam, if the current trend continues, by 2016 the top one percent will own more than the entire world combined.

Forget the Stupid Development Goals (as The Economist calls them), it’s time for people to look at the numbers and follow the money. Inequality is not inevitable, policies make it so. Every country can tailor the campaign around its realities: ending tax loopholes, improving public services, raising minimum wages. You will be hard pressed to find someone that will defend a CEO that earns 273 times the salary of the average employee.

Global transformation is going to come from the bottom up – not the top down. I’m placing my bets on campaigns like Even it Up. Forget 169 targets, its time to tackle the one percent.

–Emily Davila is the Head of Research at Mission Talent.