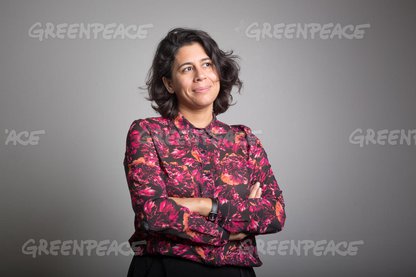 In 2018, Mission Talent placed Anabella Rosemberg in the role of International Programme Director at Greenpeace International (GPI). Previously, she worked at the International Trade Union Confederation (ITUC) as a senior climate and environment advisor and has consulted for organisations such as the European Climate Foundation and Oil Change International. In this interview, she talks about how her union background prepared her for a global leadership role at Greenpeace, what it was like to work for two co-executive directors, and how to keep a big organisation agile to confront the fast-moving challenges of our time.

You’ve been the International Programme Director for just over a year, and you came into the organisation when it was going through a lot of change. How has the role been for you?
It has been an intense experience and also a very rewarding one. I think the organisation is rethinking itself for the right reasons: the environmental crisis is no longer something that only belongs to environmentalists. So we need to rethink what Greenpeace’s contribution is to the whole movement and ensure that we are contributing. It is a moment of change, but we are asking ourselves the right kind of questions and there is openness to some honest discussions and to figuring out new solutions to old problems.

Your previous background has been working with trade unions, which is somewhat unique within the context of Greenpeace. How has working with trade unions prepared you for working with Greenpeace?
There are two things of my previous job that I think helped me navigate this past year. The first is an understanding of the tensions in organisations that work in both the global North and global South, and that, at the same time, try to keep a united movement that is respectful and supportive of what people are doing in sometimes very difficult contexts. That is certainly something I brought with me and something that the environmental movement should strengthen even more, that historically northern-based organisations to have a greater understanding of the challenges that folks experience in different contexts.

The second one is more related to union culture. It’s the understanding that people can rank behind a plan or a decision, provided that there has been a process that is clear enough for them to feel that they’ve been heard and also clarity on when and where decisions are made. Within the labour movement, I’ve always admired the capacity of folks to stand behind decisions that are not theirs but are for the benefit of the organisation moving in a clear and united direction. I cannot say that we’re there yet at Greenpeace. I think it’s a very different culture, but it would certainly benefit from those clear processes of inclusiveness, but also clear decision-making that gets everyone into the future. Certainly, that’s something I bring, and I think it is something that was also needed.

Many people had their eyes on GPI to learn lessons from a co-director model. As a member of the management team, how did you experience this?
It was a very interesting and amazing experience to see two women with very strong views and high ambition being able to deliver a joint vision, at the same time preventing any triangulation from affecting the organisation. The initial reaction in the organisation when they were both elected was, “how are we going to operate with two International Executive Directors (IED)?”, but then when Bunny McDiarmid announced she was leaving, the reaction was, “how are we going to operate with just one International Executive Director?”. I think it’s a mark for success for the model. That being said, there is a different role for the senior management team (SMT) in a co-director space. In a one-IED model, the SMT plays the role of accompanying the direction of the IED as well as the sparring partner for the IED. When you have two directors, that need is somehow solved within the pair, so it points to a different role for the SMT in that setting – both of them interesting, but different.

Greenpeace, like many international NGOs, is going through a process to transition its power and leadership to the national and regional organisations (NROs). As a leader, how have you been working towards this decentralisation?
When I came in, I thought Greenpeace was already quite decentralised. It underwent that restructuring a while ago, in particular in terms of the decentralization of campaigns. The conversations in which we are right now are one step further: taking that decentralisation as a departing line, how do we ensure that we’re having the impact we should have based on our global footprint? It is understanding that we need to build on the knowledge that our offices have of their societies, and the choices they can make, but ensuring that Greenpeace as a global organisation is aiming at the impact it should have. From my perspective, that requires a stronger focus on the strategy that needs to be tightened to allow that decentralisation in an impactful way.

Today, campaigns quickly have to adapt to new trends and opportunities. How do you keep a large organisation such as Greenpeace agile to respond to opportunities and urgent needs as they come up, yet still stick to the overall strategy of Greenpeace?
I think we need to keep asking ourselves that question because I don’t think we’ve cracked it. On the one side, Greenpeace is a fairly responsive organisation. It is relatively agile in responding to some conversations, but where we are focusing now is to improve on how we make those responses to better contribute to our campaign objectives. Generally, we tend to respond to things, but to what extent does that further our initial strategy? That is still unclear. In particular, with regards to responding to global conversations that are not necessarily environmental, for example, an economic crisis. How can we use those disruptive moments to help us further our agenda of environmental protection?

At this stage, we have identified three nuts that we need to crack. One is trusting each other. These crises happened in specific places where there is an office that is on the frontline, so we need to trust each other to design the kind of response and rank behind those who are doing so. The second one is having better decision-making processes designed in advance, that is, more protocols that allow for rapid response. This would reduce the noise around who is making a decision so that does not delay us in those moments. The third one is probably the most complex, and that is to get the organisation to look much more at what is happening outside than what is happening inside. Most of our campaigns are thought within, but opportunities and reality are outside. So, how do we turn our eyes to what is happening out there and how much time do we invest in looking at those trends and conversations? That is the critical part of being able to respond to opportunities better.

As a Latin woman, what advantages and disadvantages have you come across working in a global organisation in a senior leadership role?
First, there is an obligation to demonstrate that I am not in this position because of a ticking-boxes-exercise. In general, it is an extra burden that anyone who is not a man from the North would have. But when you “tick so many boxes” – you are a woman, you are from the South, you are a non-English speaker – you need to demonstrate that you have been hired because you can do the job and not just because you were ticking boxes.

That being said, diversity in leadership and in organisations brings disruption which can be seen as something positive or something negative – and it is probably a bit of both. Certainly, it brings different ways of tackling a problem, but the organisation needs to be ready to jump on a different way of tackling those problems. It really depends on whether the organisation is trying to become a more resilient organisation and, therefore, more diverse in order to cope with the diversity of the world out there, or if it prefers to be tighter in terms of its internal diversity. I think we are at a time in Greenpeace where diversity is welcome even if it is painful for many.

Probably one last thing is seeing people understand some of the privileges of my background. I went to university, I had supportive parents and a supportive partner, there are elements of privilege I also acknowledge for myself. What I would like to see is more people coming from very diverse backgrounds feeling that they have space and they can play that leadership role.

The climate crisis is such a huge challenge and at times it can seem insurmountable. What gives you hope and how do you keep your team motivated to work on some of the biggest challenges of our times?
Yesterday, I was reading a little children’s book with a quote of a writer I have always loved and admired, and it started with a sentence saying, “Life shrinks or expands in proportion to one’s courage”. When we’re thinking about the climate crisis, it is going to be with us until we leave this world. The thing that can give us hope or can prevent that sense of fear is the perception that we know why this is happening. We can attach reasons to what is happening and its causes, but also activate all possible means to change the situation from where we are. For the past 20 years that I have been working on climate, I have always told everyone that it is in action that we find hope. It is when we feel that we are doing the best we can at every single possible moment that we start seeing the potential and the possibility for human beings to transform the situation in which we are. Hope is never theoretical, it only comes from doing and believing in each other, and that is also from believing in each one of us changing to tackle it. Of course, I see the difficulty, but I also see how it changes when we are doing something, how it changes our connection to the crisis.