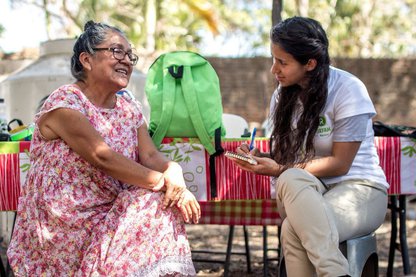 As we search for the new Executive Director for Oxfam Mexico, we took some time to learn more about the organisation’s work in Mexico, and how inequality is expressed in daily life.

The COVID-19 pandemic is shining a light on inequality all over the world, and the case of Mexico is especially stark. With 53 million people living in poverty, it is ranked among the most unequal countries in the world and it is currently on the brink of financial crisis as the value of the Peso fluctuates to a degree rarely seen in recent history.

Inequality in Mexico has deep historical roots and manifests itself in wide discrepancies among the standard of living and life expectancy. The conditions that one is born into determines the trajectory of employment and educational opportunities, which widens the inequality gap, even within people from the same regions. The country is also geographically divided by income level; while the north has greater purchasing power, the south has the lowest wages.

According to the Women’s National Institute in Mexico, in some regions, women receive a salary of up to 60% less than men. in addition, women take on a larger responsibility of unpaid household work and emotional labour: on average, a woman spends 40 days per year on housework, compared to the 16 days a man spends. For the lower class, the difference is even wider: women dedicate 45 days a year to household chores, compared to 15 for men.

Indigenous people in Mexico carry out the majority of agricultural, construction or informal work, and overall have incomes that fall below the average. They are also more likely to live in isolated areas without access to basic services. The situation for women indigenous people is even worse; according to the United Nations, 7% of indigenous women live on less than USD $1.90 a day.

In this context, organisations like Oxfam Mexico are leading an action plan to influence different stakeholders to promote change. They take a three-pronged approach:

Oxfam Mexico also has an important voice as a Southern leader within the Oxfam confederation, which is leading a global campaign on inequality called Even It Up.

Like Oxfam Mexico, other institutions have joined voices to increase pressure to generate change, including FUNDAR, and Equis Justicia, IPAS, and Católicas por el Derecho a Decidir among others. Working together, they know that their voice will be louder and that they will be heard.