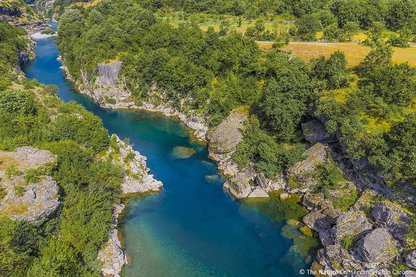 WWF is a non-profit organisation that has led the fight for the conservation of nature and the defence of species for the last 60 years around the world. In Eastern Europe, WWF has been working towards the protection of the Dinaric Arc for more than 15 years, and in 2015 the organisation was formally established in the region. WWF Adria currently has operations in Albania, Bosnia and Herzegovina, Croatia, Kosovo, Montenegro, North Macedonia, Serbia, and Slovenia.

In the Balkan region, WWF Adria has focused on recovering and maintaining the natural wealth of the region through the management of protected areas at sea and on land. Their activities include involving the local communities to promote the sustainable development of the region through ecotourism; protecting rivers and access to water; supporting sustainable fishing projects to maintain healthy marine ecosystems; and promoting political advocacy, governance and investment campaigns to improve the natural capital of the region of the people and of the society that inhabits it.

Recently, WWF Adria launched the cycling route called Amazon of Europe Bike Trail together with 26 other partners in Austria, Slovenia, Croatia, Hungary, and Serbia. This initiative consists of a route of 1,250 km in 27 stages that offers an opportunity to coincide a cycling holiday in nature with a cultural experience. With this initiative, they promote ecotourism and directly support nature conservation in the region.

WWF Adria also has launched a campaign against the construction of small hydroelectric plants in the region called Losing Rivers. These plants change the course of the water causing droughts so that the inhabitants of the areas that depend on the rivers must move due to the lack of water to irrigate their lands. In addition, it has an impact on the biodiversity of rivers causing the disappearance of key species. Small hydroelectric plants have grown by 300% in the region since 2018 and despite being considered renewable energy, these small plants are not efficient enough, as they cover less than 4% of the energy demand of the Balkan region.

WWF Adria works to raise awareness throughout the Adria region of the importance of sustainable consumption of seafood in changing the purchasing power of consumers and people’s ability to influence the fishing industry. To do this, it has brought together all stakeholders to work on a shared vision for a prosperous Adriatic Sea by reestablishing key species to levels that are healthy for society, the environment and the economy.

In the same way, WWF Adria implements different initiatives to promote political advocacy. In September of this year, more than 60 Heads of State and Government, including the leaders of five of the world’s largest economies, endorse the Leaders’ Pledge for Nature, committing to decisive action on nature to protect human and planetary health for 2030 and WWF Adria appealed to the leaders of the countries of the Balkan region to join this pledge.

With the aim of increasing the impact of WWF Adria in the region, growing the number of projects, accelerating the generation of awareness, and building a future in which people live in harmony with nature in the Balkan region, WWF Adria is looking for a new leader who will unite the team and develop governance structures to strengthen the organisation’s impact.