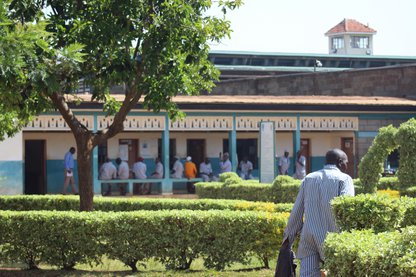 Nervousness hit me when I read the email from the Africa Prisons Project:

“Kamiti is a male maximum security prison… [Visitors] should avoid being in a secluded area alone with an inmate. It is important to adhere to appropriate official dress code, avoid tight fitting or revealing clothes. The clothes should not show cleavage or expose upper arms and mini or small dresses should be discouraged.”

From my childhood, we knew that the worst criminals were locked up at Kamiti, and here I was voluntarily visiting the prison! I imagined it to be dark and grungy. I expected it to be in the poorest conditions possible. I felt butterflies in my stomach. Why am I doing this?

On the way to the prison, I sat quietly. My Mum was driving; we were going to do the visit together. She tried to calm me down with bubbly talk, but all I wanted was quiet to deal with the nerves. I kept the reason for our visit in mind: I was keen to see the work that APP is doing, firsthand. I am leading the searches for their new Director of Development, Legal Services and Director of Legal Education. This visit would allow me to have a better understanding of APP, and help me as I continue with the search. I also wanted to experience true Christianity in action, which is what I believe APP is doing with the work in prison.

We reached the gates of the Kamiti Maximum Prison 20 minutes before our appointed time. A call to the Country Director assured us that we could drive in and park, but we would have to wait in the parking lot for her, as she had our permission letter for us to enter the prison. There was a long pedestrian line at the main gate. By coincidence, we had come on Remote Parenting Day. Families would bring food and spend the day with Dad, as the children are also on holiday at this time.

The second gate into the prison, where the prisoners are actually held, is a big wooden door with a red sign at the top. No pictures allowed. We proceeded to the reception where we handed in our IDs, letter and car keys. Then we had a security check; removing our shoes, belts and jewellery.

A guard was assigned to us, and we walked across the courtyard to the Academy, where APP carries out its legal education programme. There is also a primary and secondary school for inmates who would like to complete their education.

As soon as we were assigned a guard, I remembered our conversation with the Country Director: we should stick close to her and the guard, we should not speak to inmates, and if they did approach us or even ask for contacts, we should direct them to APP. I noticed that the CD was also fiddling with her coat and buttoning up! I pulled my sweater close across my chest. My Mum was so calm!

As we walked through a third gate, into the courtyard, there was a lot of camaraderie. A tent set up on one side and a jumping castle on the other. There was music playing and generally happy mood in the air. I felt calm. There were family members everywhere.

We went through a fourth gate to the industrial side of the prison where the Academy was. As we passed through each gate, the guards greeted us with big smiles, hearty handshakes and only good vibes towards APP.

There were prisoners everywhere. As we walked past, I kept my head down. No eye contact. I did not want an incident. Nonetheless, I looked around the courtyards. It wasn’t as I expected. It was clean, for all intents and purposes. It was not grungy. But we could not access the area where the prisoners are locked up. The cells. Maybe that side is a different story.

A fifth gate led us into the Academy. Here we spoke briefly to an administrator, and then we sat down in the back of a class session for the law programme. Two of the students were prison guards and the third was an inmate. The students interacted with each other and with the tutor in a way that showed interest and passion. At this point, APP has about 40+ inmates and prison wardens enrolled in the law degree programme with the University of London. The courses have already saved lives: a death row inmate and APP student named Susan Kigala won her court case and was released from prison.  As a result of her case, the law no longer mandates capital punishment for all murder cases in Uganda.

As we left the Academy, we stopped to speak to an APP student, now in his third year. He is the 13th petitioner in a case before the High Court. Because of his studies under the APP Legal Education Programme, he is able to represent himself and the other 12 petitioners! He told us that he is in favour with the judge, maybe because of good standing of APP, or the fact that he is an inmate who knows the law.

Seeing the work and positive impact of APP at Kamiti Prison was heartwarming. The good name that APP has amongst the prison staff and wardens was also great to see. This visit was definitely an added motivation to continue supporting APP!

On the way out of Kamiti, my Mum made sure to buy some plants from the prison nursery to support the inmates’ efforts; may they grow as the work of APP grows and positively impacts the lives of prisoners.

Mwende Njuguna is a Senior Consultant with Mission Talent.